Rucina is one of Bali’s cultural icons.  She has lived in Bali since 1974 when she did intensive study of dance and its relationship to religion.  Her book, co authored with I Wayan Dibia, BALINESE DANCE, DRAMA AND MUSIC:  AN INTRODUCTION TO BALINESE PERFORMING ARTS is used in classrooms around the world and by travellers coming to Bali who want to know more about the performing arts in context.  She pioneered World Learning’s (ex Experiment in International Living) Bali Academic Semester Abroad program in 1985 and then switched to the other end of the spectrum and ran Elderhostel cultural programs for ten years with her late husband, Anak Agung Gede Putra Rangki.

She and Agung were the klian adat or traditional heads of their hamlet in Abianbase, Kapal for 2013; as far as we know she is the only foreigner to have held this position.

After the initial Bali bombings in 2002, the non profit sector became her world and she was the director of YKIP for over a decade, assisting survivors of the bomb with scholarships and livelihood programs.  She then worked for the Annika Linden Foundation, helping to create the Annika Linden Centre in Denpasar, Bali, dedicated to one of the bomb victims in the spirit of helping those who are economically disadvantaged.  Currently, she runs the CSR program of the Amicorp Group via the Amicorp Community Foundation in the village of Les, North Bali, where a Vocational Training Center is set to be built.

In 2003, she and three other foreign women of a certain age and size (all married to local men) formed Grup Gedebong Goyang, a comedy group that does song paradies and skits about current affairs in Bali.  Their Balinese version of SAKITNYA TOH DISINI has over a million hits!

Currently she divides her time between Les village and Ubud, where she resides with her entire family (sons Gung Anom and Gung Prabu; daughter in laws Jero Bahari/Edenie and Gung Tia and grandson Gung Arun and granddaughter Gung Prabha) and three dogs. 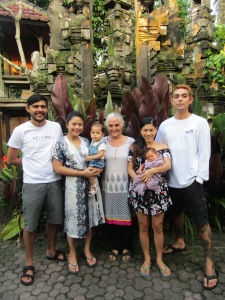